What do you want to learn about?

We have welcomed hundreds of delegates from around the world who wish to learn how we regulate Alberta’s energy industry. In 2013—the year we became the single provincial energy regulator—the number of delegates interested in engaging with us significantly increased.

With the international community requesting delegation visits about 30 times per year, the AER decided in 2017 to host its inaugural Regulatory Excellence Global Summit. The three-day event brought together around 100 delegates from 13 countries. Together, we shared information and inspired collaboration and innovation in the regulatory field.

Read more about the Global Summit or register for the next event.

We discuss a number of topics during delegation visits. Some main areas of interest among delegates include the following 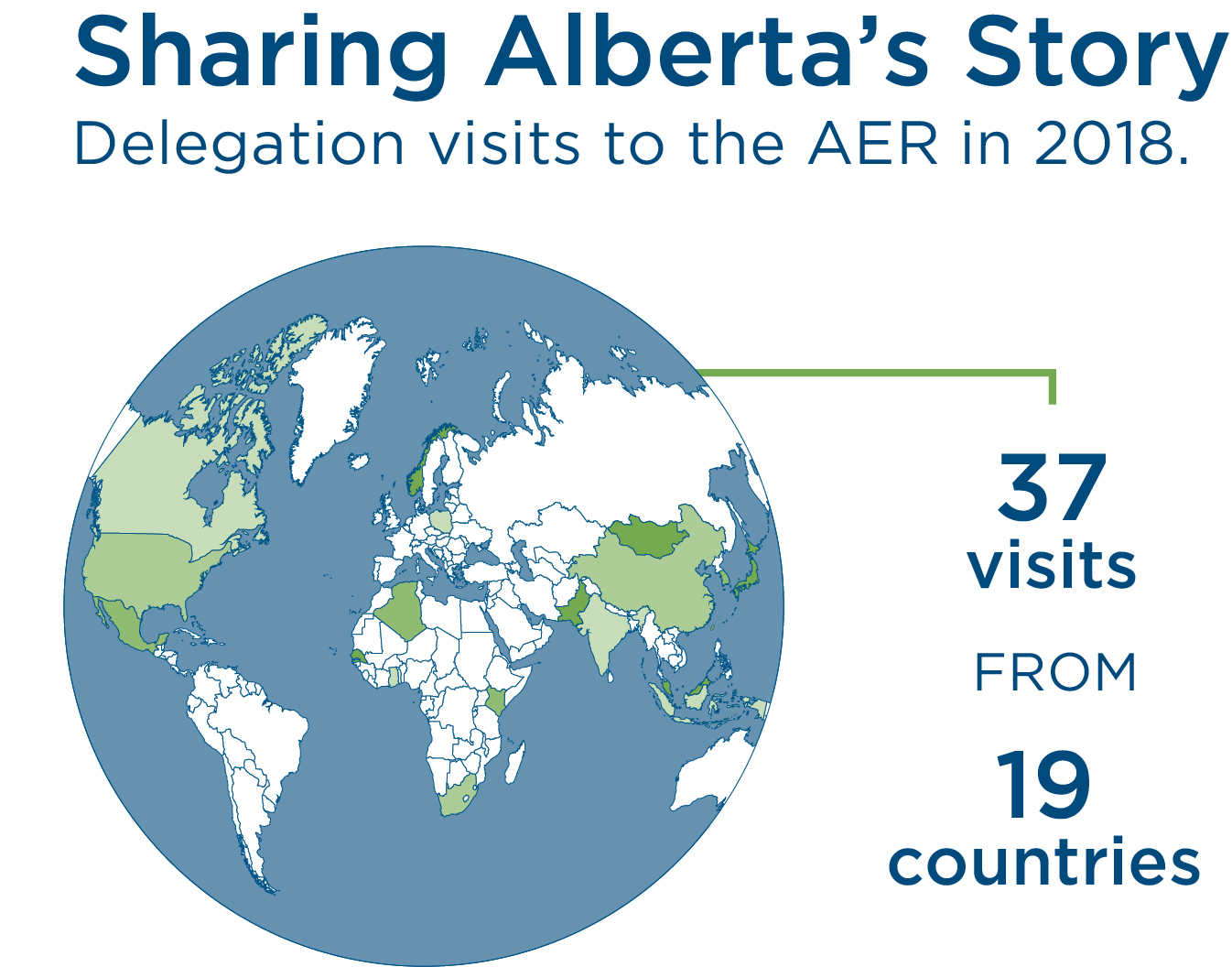 These partnerships include the following:

Government of the Northwest Territories

In May 2014, the AER and the British Columbia Oil and Gas Commission agreed to form a strategic partnership through an MOU to enhance energy resource regulation in both Alberta and British Columbia.

The MOU signed in June 2014 between the AER and Mexico’s energy regulator, the ComisiÃ³n Nacional de Hidrocarburos, formalizes an agreement to work collaboratively on regulatory best practices in the development of hydrocarbon resources.

The AER’s Alberta Geological Survey and Stichting Deltares, an independent institute for applied research in the field of water and subsurface in the Netherlands, signed an MOU in December 2014 to cooperate in advancing energy regulation through hydrogeological science.

Recognizing the importance of geoscience in national sustainable development, wealth creation, environmental protection, and enhancement of the quality of life, the AER’s Alberta Geological Survey and the British Geological Survey signed a letter of intent in May 2016 that enables technical collaboration in earth sciences.

In recognition of the importance of geoscience in national sustainable development and environmental protection, the AER’s Alberta Geological Survey signed a letter of intent with the Polish Geological Institute in November 2017 (AGS - PGI meeting held November, 2018). This agreement facilitates the formal exchange of information as well as collaborative research efforts between the two regulators.

The Western Regulators Forum (WRF) promotes collaboration and pursues mutual priorities among oil and gas regulators in Western Canada. It was established in 2014 under the direction and authority of the:

The WRF structure includes a board, executive committee, and secretariat of the member organizations.  The chair of these committees currently resides with BCOGC and will rotate to Saskatchewan Ministry of Energy and Resource in April 2019.

The WRF’s board has developed and approved a strategic plan that includes the vision, goals, and mandate, as well as a revised terms of reference.

The WRF is currently working on several projects including incident reporting, strategic use of standards in regulation, indigenous engagement, transparency, and pipeline regulation opportunities.

To learn more about national and international relations at the AER, please email @email. If you are interested in visiting or would like to have an AER representative participate in an upcoming conference, please complete one of the forms below and send it to us at the email address above.

The information (including data) contained herein was collected and is maintained by the Alberta Energy Regulator (AER). Use of this information and other information (collectively the "content") is governed by the terms and conditions set ("Terms of Use"). Any access to or use of the content constitutes acceptance of the Terms of Use.

The AER has not verified and makes no representation or warranty as to the accuracy, completeness, or reliability of any information or data in this document or that it will be suitable for any particular purpose or use. The AER in not responsible for any inaccuracies, errors or omissions in the information or data and is not liable for any direct or indirect losses arising out of any use of this information. For additional information about the limitations and restrictions applicable to this document, please refer to the AER Copyright and Disclaimer webpage.