Many things contribute to climate change, including emissions from oil and gas operations. We collaborated with the Government of Alberta to protect our environment by reducing methane emissions.

What is methane?
Methane is a colourless, odourless, flammable greenhouse gas. It is the main constituent of natural gas. The global warming potential of methane is significant—it is estimated to be 25 times greater than that of carbon dioxide over a 100-year period.

Approach to Methane Reduction
To meet the goal set out by the Government of Alberta, we developed requirements in Directive 060: Upstream Petroleum Industry Flaring, Incinerating, and Venting and Directive 017: Measurement Requirements for Oil and Gas Operations. These draft requirements were released for public comment in April 2018, and in December 2018, we released the finalized requirements.

Companies may request to use an alternative fugitive emissions management program (Alt-FEMP) to deviate from the technologies and processes outlined in Directive 060. The AER has developed an Alt-FEMP checklist to provide guidance to industry on these types of requests.

While we authored the new requirements, the Government of Alberta played a key role by setting the policy direction. 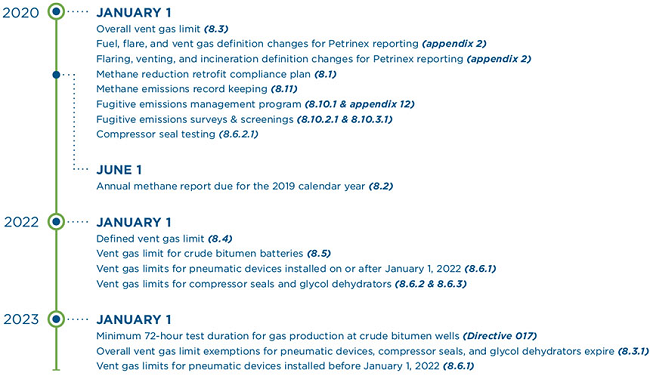 How the Requirements Were Developed
Alongside the Government of Alberta, we held multistakeholder committee meetings to develop options for the methane reduction requirements. The committees had representatives from environmental nongovernment organizations, the oil and gas industry, and technology groups.

The information (including data) contained herein was collected and is maintained by the Alberta Energy Regulator (AER). Use of this information and other information (collectively the "content") is governed by the terms and conditions set out beasdsdslow ("Terms of Use"). Any access to or use of the content constitutes acceptance of the Terms of Use.

The AER has not verified and makes no representation or warranty as to the accuracy, completeness, or reliability of any information or data in this document or that it will b

asdjde suitable for any particular purpose or use. The AER in not responsible for any inaccuracies, errors or omissions in the information or data and is not liable for any direct or indirect losses arising out of any use of this information. For additional information about the limitations and restrictions applicable to this document, please refer to the AER Copyright and Disclaimer webpage.